Docentric is an MS Word document generation, mail-merge and reporting toolkit for .NET. It allows the .NET developers to incorporate MS Word document creation capabilities into any type of a .NET application without the need of Microsoft Word being installed on a machine running the application.

The toolkit honors a template based approach where a developer does not need to create documents programmatically from scratch. Instead, a developer creates a report template which basically is just an ordinary Microsoft Word document (.docx) containing special Docentric Elements that designate data-bound parts of the document content, such as value placeholder elements. These data-bound parts are during the report generation time merged and populated with data by the Docentric Report Engine, resulting in a generated report document. 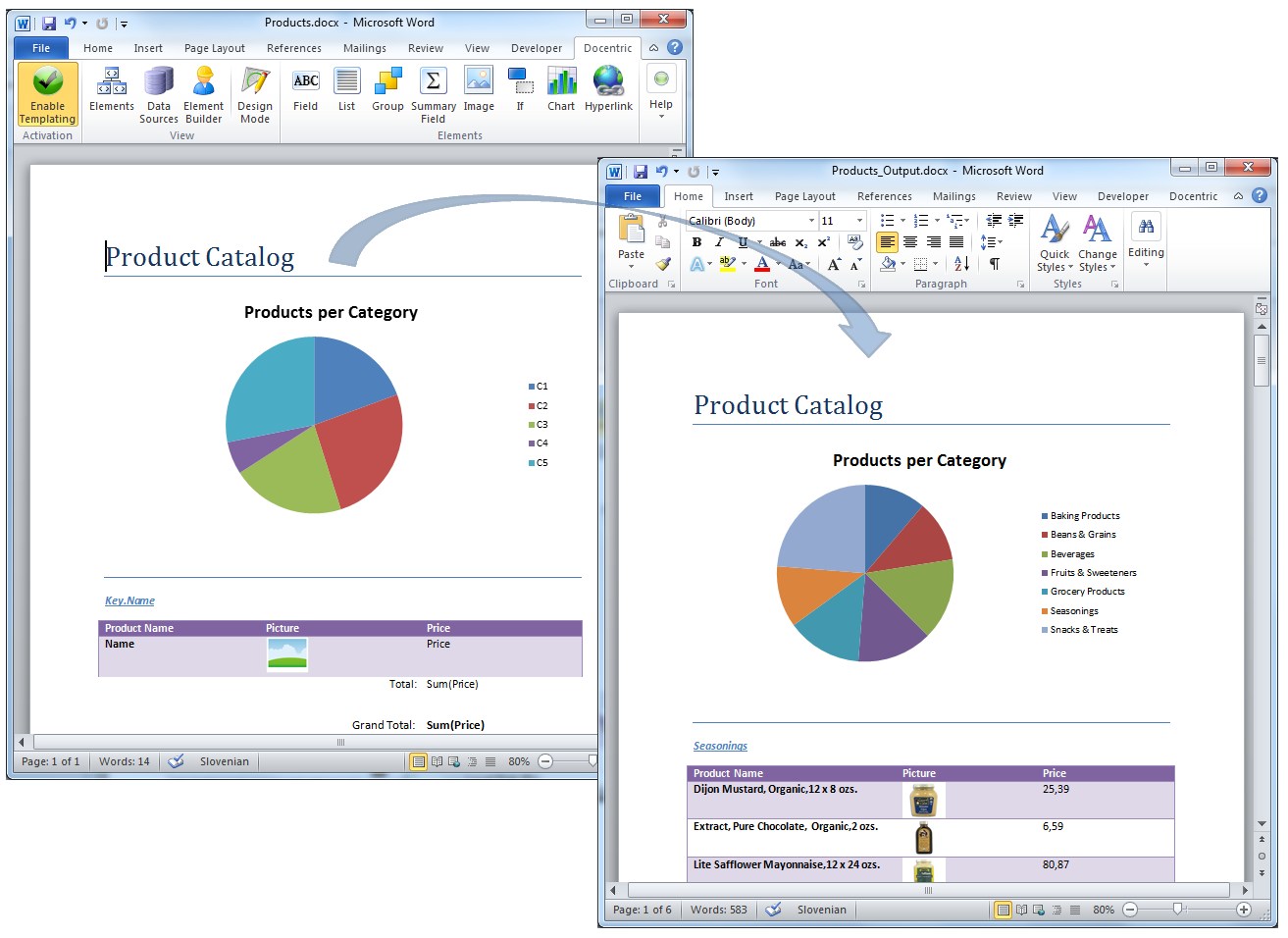 No MS Word automation, no COM

Applications using Microsoft Office automation via COM DLLs as a solution to produce MS Word documents proved to be unstable, slow and not scalable. Even Microsoft itself discourages developers from using it especially as a server-side solution. The Docentric Report Engine is a 100% managed .NET class library that does not need MS Word to be installed on a production machine, be it a client or a server machine. Using Docentric as a document generation solution in your application will improve its stability, scalability and document generation will become incomparable fast.

The toolkit is very good at doing Mail-Merge. But it can also be used for merging and combining several Word documents into a "Master" document. Document Merging follows the template-based approach which means that you start with the Master template and mark it with the Sub-Document placeholder elements which will get replaced with real sub-documents when generating the document.

Templating instead of Object Model approach

Using Docentric toolkit, developers do not need to create a document from scratch using some kind of APIs. They instead create and design a report template document right in MS Word. Report templates have regular static content but also include data-bound elements. Later, at the report generation time, such a report template is processed by the Docentric Report Engine and merged with application data, resulting in the final report/document.

The fact the reports are designed in MS Word makes Docentric toolkit a very unique reporting toolkit. MS Word is a widely used tool for authoring documents which makes Docentric toolkit a very attractive business reporting solution. Since the toolkit supports many features such as data binding, schema import and many more, the toolkit also provides a special MS Word Add-In that exposes these features and related functionalities to a report designer. The Add-In does not suppress or disables any of the MS Word existing features in any way, instead it enables and helps a report developer to work with MS Word document as a report template. More >>

Templates can be also authored by non-developers

Report templates can initially be created by developers who know which data the report will be bound to. The Docentric's Add-In for MS Word allows developers to import .NET classes and XSD files as schamas for data sources used on a report which are saved together with the report template itself. Such template can be later easily modified and fine-tuned by anyone who can use MS Word. By "modifications" it is meant not just changing styles and static content but also adding, removing and changing data-bound fields on the template according to the previously imported schema. This can be a very important feature because it allows software vendors using Docentric toolkit in their applications to leave the responsibility of a report (re)design to their customers.

Use .Net Objects or XML as data sources

Reports and documents can be populated by .NET objects directly, without converting them into a Data Tables or any other form first. And on the other side, .Net classes can be easily imported into report templates as schemas for data sources. In cross-platform, SOA and other scenarios where the use of .Net objects as data sources is not suitable, impossible or cumbersome, data in the form of XML documents can be used as well. When using XML as a data source for a report, you get all the power of XPath when binding Docentric elements to data. More >>

Can be used in any type of .NET application

Since the Docentric report engine is just an ordinary .NET class library it can be included into any .NET project and such an application can be anything from WinForms or WPF to ASP.NET or Windows service application. For example, in a 3-tier application it is up to you to decide where you want to generate MS Word documents, on either client side or server side. There are neither technical nor licensing limitations.

Docentric toolkit has quite a sophisticated diagnostics capabilities. All report's data-bound fields are constantly checked against imported schema in the MS Word Add-In and you will be immediately warned if you misspell a property name. If there is no schema available at the report template design time, then all data-binding errors will be caught by report engine at production time and will (by default) be written at the beginning of the resulting document.

The Docentric report engine does not interop with COM and does not depend on MS Word in order to generate an MS Word document and therefore generates reports and documents with high speed.
Copyright © 2013  Docentric d.o.o. All rights reserved.